Mycotoxins are naturally produced by different types of fungi. They enter the food chain after infection of crops in the field or during storage and are typically found in cereals, oilseeds and byproducts. Once ingested by animals mycotoxins exert a wide range of toxic effects resulting in poor performances and economic losses. Applying an effective toxin binder eliminates the risk of this hidden danger. 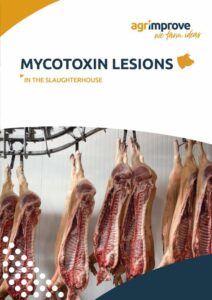 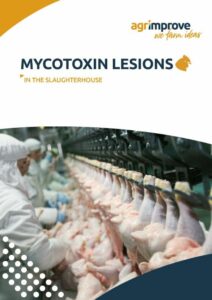 Most common mycotoxins that pose a risk to animal health are aflatoxin, ochratoxin, fumonisin, zearalenone, T-2 toxin and deoxynivalenol. In the minority of cases mycotoxins occur at high concentrations resulting in acute mycotoxicosis with clear clinical symptoms. Examples of symptoms are vomiting, oral lesions, liver and kidney damage and high mortality.

In most cases however, mycotoxins occur at low concentrations resulting in subclinical effects. Damage to the intestinal architecture and gut barrier results in lower production efficiency. Adverse effects on the immune system may lead to increased pathogen susceptibility and lowered vaccine response.

The occurrence of mycotoxins depends on many factors including the geographical region and weather conditions. Despite preventive pre- and post-harvest measurements mycotoxins still occur in most feeds being analyzed.

The use of an effective toxin binder in the feed disarms mycotoxins, independent of the uncertain factors above. Leave us a message or contact your local Agrimprove expert.
We will get back to you with more detailled information.